Free Shipping with order of $49+ Apple cinnamon syrup is a delicious way to add the flavors of fall to your breakfast table or spice up some hot chocolate.

The ingredients of apple cinnamon syrup are simple.  You may even have them in your pantry.  If not, snag them at the grocery store so you can make this syrup your family is sure to love. What kind of apple juice should I use?

The apple juice in this recipe is just your everyday ordinary apple juice.  You don’t need any special kind of apple juice to make the syrup.  However, if you want to add something extra, apple cider or an unfiltered apple juice would be amazing and add a bit more fruity flavor.

What kind of cinnamon should I use?

Cinnamon comes from the inner bark of a tree.  Because it’s made of bark it won’t dissolve in the syrup.  There are two kinds of cinnamon – cassia and Ceylon, but either of them will work in this recipe.

What kind of sugar should I use? What can I use Apple Cinnamon Syrup for?

This apple cinnamon syrup is tasty on basic buttermilk pancakes, but would also be delicious on a pumpkin pancake or a cornmeal waffle.  Try sautéing some chopped apples in butter and adding it to the syrup for an impressive topping for ice cream or cake.  Apple cinnamon syrup also makes a great glaze for baked ham.  However you use it, we’re sure you will love it.  Just make sure to pour it from a mason jar with your Ergo Spout®. 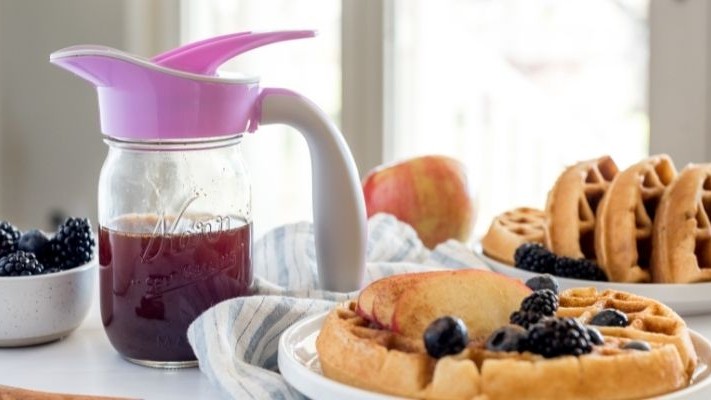 Syrup will be thin.

HOW TO TRAP FRUIT FLIES WITHOUT VINEGAR

Wondering how to trap fruit flies without vinegar?  There are lots of options!  Let us show you 5 different kinds of bait to use with our Fruit Fly Funnel. HOW TO START FOOD STORAGE WITH @MELYSSA_SAVES

We are excited to welcome Melyssa of the Instagram @melyssa_saves to our Culinesco blog for this guest post on getting started with food storage.  As a company, Culinesco believes in having a well stocked pantry and food storage on hand.

Our silicone bottle brush is a fantastic cleaning tool for your kitchen!  It’s unique length and silicone bristles not only make it handy but a must have to get into tall jars or hard to reach places.  Plus it comes in gorgeous colors!